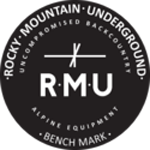 RMU started in a garage in Frisco, CO. There, a group of skiers decided to build a product to meet their own demands.